Dauvit Horsbroch and Sheena Blackhall talk about the Scots language.

Multicultural Scotland's for me. -A children's song for all the people of Scotland. 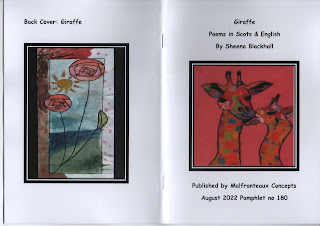 Acknowledgements Title: Giraffe (Pamphlet no 180 ) Front Cover : by Jessica Blackhall, aged 11, (after a print by Steven Brown, Francie & Josie McZoo).Back Cover: by Winnie Blackhall aged 9, (after a floral design by Charles Rennie Mackintosh) Published by Malfranteaux Concepts Printed by Retro Overflow Copyright: Sheena Blackhall, August 2022 Anne Simpson, Chair, The Book of Deer Project SCIO has written to say that she hopes to use the Poem The Book of Deer, (with others) in print or via a performance at the end of summer. Permission has been given to the composer Annabel Kershaw to use the poem Solar Siblings within a choir composition for the Aberdeen Sound Festival. It is a choral piece and will be sung by the Aberdeen -based choir, Con Anima. The performance will be free to the public and will take place within the Aberdeen Art Gallery on 29th October at 3pm.
Posted by Sheena Blackhall at 16:30 No comments:

Acknowledgements Title:Pamphlet no 179 Cover: Crow on a Branch by Kawanabe Kyosai (1831-1889) from the online collection of Brooklyn Museum Published by Malfranteaux Concepts Printed by Retro Overflow Copyright: Sheena Blackhall, July 2022: North-east poet Sheena Blackhall was commissioned to write 5 playlets, to perfom alongside actor Hamish Somers . The work was specially created for the magical and intimate surrounds of St Margaret’s Braemar, drawing inspiration from major historical events and ghost stories of the area. The playlets were inspired by local legend, many learned on her aunt’s bus service which ran tours with local stories for tourists.The poem Filmin oor Culture was written for the Doric film festival, 2022. The Song: Homage to Haddo was written after being asked to perform at Haddo House. Linking Doric Couplets were commissioned as part of the filmed documentary Tatties and Typhoid Ham, a fusion of evolving visual art, music, and spoken word, wherein three women from Aberdeen, Diana Buchan, Ruby Stephen, and Pat Robertson, shared their thoughts and experiences on being locked down during the typhoid outbreak in 1964 and their concurrent situation during the 2020 Coronavirus outbreak. It was directed by visual artist Kate Steenhauer and produced in collaboration with Blackhall, composer Maria Sappho, and videographers Alex Cormack and Martina Camatta.Thanks are due to Malfranteaux Concept for publishing this volume, and to the creator of the cover image.July 2022 Sheena Blackhall This is a limited print run of 50 copies
Posted by Sheena Blackhall at 09:24 No comments:

Title: Norlan Lichts.First published 2022 by Rymour Books 45 Needless Road, Perth PH20LE © The Authors 2022 ISBN 978-1-8384052-0-0 http://www.rymour.co.uk cover and book design by Ian Spring printed by Imprint Digital, Exeter, Devon A CIP record for this book is available from the British Library The paper used in this book is approved by the Forest Stewardship Council This book is set in Bembo, a typeface cut by Francesco Griffo in 1495 for the works of Pietro Bembo, a poet, a Cardinal and lover of Lucrezia Borgia. Lesley Benzie, Sheena Blackhall and Sheila Templeton are the pre-eminent women poets writing in the Doric, or the Scots of North-east Scotland. This is a new collection of predominently unpublished work by them.
Posted by Sheena Blackhall at 11:23 No comments:

The Poems: Suitcase of Dreams

Acknowledgements: Title: Suitcase of Dreams Pamphlet no 178 Cover: Softly Surreal Incognito photo by Ozstuff1 on Pinterest:Published by Malfranteaux Concepts :Printed by Retro Overflow: Copyright: Sheena Blackhall, June 2022 The Treisur Hunters was a commissioned story for the BBC childrens’ schools section. Like T-Rex was published in The Scotsman. Many of the poems were inspired by paintings exhibited in the Aberdeen Artist Society’s exhibition in 2022 in Aberdeen Art Gallery. Performers was written during the Portsoy Traditional Festival weekend, coinciding with the Queen’s Platinum Jubilee. The Hairdresser, the Cooncillor, the Coven, features on https://gudeandgodlie.wordpress.com/
Posted by Sheena Blackhall at 10:41 No comments:

The Poems: There is no Cow on the Ice

Acknowledgements Title: There’s no Cow on the Ice (Pamphlet no 177 )Cover: Royalty Free online art Published by Malfranteaux Concepts Printed by Retro Overflow Copyright: Sheena Blackhall, May 2022 There’s No Snow on the Ice is a Swedish saying, meaning Don’t Worry.Most of these poems were penned on a week’s creative writing retreat at Dhanakosa, Balquidder, incorporating Tai Chi, Meditation & Poetry. The tutors were Linda France and Sukhema (Larry Butler). For more information on publications by Sheena Blackhall visit http://sheenablackhall.blogspot.com or the on line catalogue of the National Library of Scotland www.nls.uk/catalogues/online/index/html All of Blackhall’s poems in Scots & English are now uploaded on www.poemhunter.com . Her website can be found on http://smiddleton4.wix.com/sheena-blackhall. An interview in podcast form with the poet appears on http://www.scottishpoetrylibrary.org.uk/connect/podcast/sheena-blackhall Thanks are due to Malfranteaux Concept for publishing this volume.
Posted by Sheena Blackhall at 09:43 No comments:

Title: Something Fishy This Way Comes :Pamphlet no 176: Cover: Royalty Free Clipart.Published by Malfranteaux Concepts, Printed by Retro Overflow Copyright: Sheena Blackhall, March 2022 Acknowledgements Many of these poems were written after staying a few days in Clippie Lodge, Ballater. This is an extensive refurbishment of my family’s holiday home, owned by my aunt, the late Helen Strachan, then called ‘The Shack’…a very different, basic, but much loved dwelling.
Posted by Sheena Blackhall at 20:43 No comments:

Title:: Carpe Diem Pamphlet no 175 Cover: Girl Before the Mirror (1932) Picasso (free from the web) Published by Malfranteaux Concepts Printed by Retro Overflow Copyright: Sheena Blackhall February 2022 Acknowledgements I was commissioned by the Spectra team to contribute a piece to Writ Large. They asked artists Illuminos to use a section of one poem to be the basis of a large-scale video map projection on Marsichal College over the Spectra dates 10-13 Feb. Six Frames is a playful interpretation of six stanzas from my poem On the Bus: nummer 1 route. Using six repeating sections of the Marischal College facade, Illuminos used principles found in flick books and early animation, to take us on a journey through Aberdeen from the bus route of the poem. Using a six frames per second repeating format, the building is brought to life through cascading rhythmic imagery drawn from my poem in Scots dialect - a pulsing, whirring, humming trundle from Brig o Dee to Music Haa to Justice Coort and beyond. A bit more about their work is here https://www.illuminos.co.uk/ The poem Lang Sandy appeared in Eiks an Ens, Nummer 25 Scots Leid Associe Januar’s online feature. This is a limited edition of 50 copies February c. Sheena Blackhall ‘Picasso's rendering of the reflection in the mirror has been described by Debbie Goldberg at the Museum of Modern Art as a depiction of Death. Picasso made reference to other artworks within his compositions and may have been influenced by a painting belonging to a friend which was an image of Death holding up a mirror to a woman. The prevailing theme of this is memento mori or "remember that life is brief". From Wikipedia
Posted by Sheena Blackhall at 15:31 No comments:

Acknowledgements Title: Ganesh’s Daughter,Pamphlet no 174, Cover: Pin Interest clip art elephant,Published by Malfranteaux Concepts,Printed by Retro Overflow Copyright: Sheena Blackhall January 2022. The song ‘David Toulmin’s Heirskip’ which sings to the tune Drumdelgie was commissioned by the Elphinstone Institute to celebrate the launch of their book which brings together all the winning stories since inception of the Toulmin Story Comp together with selected others in the anthology Dinna Mess wi the Popo and other stories of the North-East of Scotland. Balvaird Castle appeared in The Northern Light Issue 55 – December 2021 Confraternity of the Knights of the Most Holy Trinity (Priory of Scotland). ‘Birse Kirk’ features in the The Dee Don Ceilidh Collective ‘Our Living Rivers and Glens’ project. Added to their media map, as an inspiration for their composers and songwriters, Jenny Sturgeon has cited it as one of her inspirations for her new song ‘Spinning Discs’. The tunes and songs are now complete, and you can listen to them on the designated website A‘legacy’ book for the project, will include all of the new music and songs, and some of the images and inspirations behind them. Birse Kirk will feature in this. The Spikk o the Nor East Leid was commissioned by DOST, and the poem (text & video) is live on dsl.ac.uk/Aitken100.‘A Dictionary of the Older Scottish Tongue (‘DOST’, 1932–2002) is a unique record of the language, history, culture and traditions of the Scots-speaking people from their earliest records to the year 1700. Running to 8,100 pages, this national treasure incorporates some 50,000 entries and 581,000 illustrative quotations drawn from more than three centuries of language use…. This year marks the 100th anniversary of the birth of one of its most significant contributors: A.J. (Jack) Aitken (1921–1998), an outstanding figure in Scots language scholarship and editor of DOST from 1955 to 1986. …’As a lasting tribute to DOS five poets were commissioned to write poems celebration of Scots and its extensive history. The poems, written in a variety of local vernaculars, were published on St Andrew’s Day 2021, by Sheena Blackhall, Liz Lochhead, Alison Millar, Gregor Steele and Rab Wilson Sheena Blackhall c. January 2022
Posted by Sheena Blackhall at 18:49 No comments: