Dauvit Horsbroch and Sheena Blackhall talk about the Scots language.

Multicultural Scotland's for me. -A children's song for all the people of Scotland.

The Poems: The Thunderbolt Carline

Title: The Thunderbolt Carline (Pamphlet 158), Cover Design : k-mitch-hodge-w8 free download from upsplash,published by Malfranteaux Concepts Printed by Repro Overflow, Aberdeen. Sawney Bean has been recorded for an upcoming event on Waywords, hosted by Aberdeen University. In the Gairden is to be published by Lallans. The Maid o Ocram is a Doric owersett of a poem by John Clare. I heard the Scots version, Lord Gregory, sung with great feeling by the late Stanley Robertson. For more information on publications by Sheena Blackhall, visit http://sheenablackhall.blogspot.com or the on-line catalogue of the Nat. Library of Scotland www.nls.uk/catalogues/online/index/html. All of Blackhall’s poems in Scots and English, are now uploaded on www.poemhunter.com. Her website can be found on http://smiddleton4.wix.com/sheena-blackhall. An interview in podcast form with the poet appears on: http://www.scottishpoetrylibrary.org.uk/connect/podcast/sheena-blackhall.Thanks are due to Malfranteaux Concept for publishing this volume, and to the creator of the cover image.Sheena Blackhall September 2020 Dedicated to Skye Anderson, aged 3. This is a limited print run of 50 books
Posted by Sheena Blackhall at 19:42 No comments:

The Poems: The TVs 10th Birthday 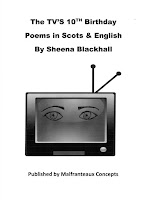 Acknowledgements I wrote The Cam-ruadh and Fear na Bruach: Man of the Braes, after filming stories in Ballater with Jackie Ross and Grace Banks for the 2020 International Storytelling Festival. Two Chekhov owersetts were performed via Zoom in the Edinburgh Literary Festival Chekhov event, Doctor Chekhov’s Prescription, 23rd August 2020. 2020 marks 160 years since master playwright and short-story writer Anton Pavlovich Chekhov was born in Southern Russia. This was hosted by Starling and the Scotland Russia Forum in cooperation with Tom Hubbard and friends . Twa Laments were published in the anthology The Hale Clamjamfry, Poems from the North East of Scotland, pub by Tangletree Pres, Aboyne, with the aid of the Doric Board. Veesions frae a Heilan Burn, 1986: was a Scottish Poetry Library commission chosen by Thomas Clark as part of the Scottish Poetry Library’s ‘Champions’ project, a guest curatorship programme to help extend their national reach. Thomas Clark says, ‘Oor theme is ‘Vision’, an if language is a wey o seein the warld, there’s naebody maks thon ony plainer than Sheena Blackhall. Is a ‘futterat’ actually jist a common ferret? Dae ‘sparkling’ an ‘skinklin’ really mean the exact same thing? The act o seein, an describin whit is seen, is a transformative yin, kythin the mither tongue o the minority as somethin mair than either medium or message. Blackhall’s rich northern Scots middens awthegither the intermediary o English, an cairries its imagery vieve frae the ee straicht through tae the hert.’ The film of the poem (Glen Gairn) was filmed an edited by Andrew Davidson from Scots Radio supported by the Doric Board. It went live on the SPL site on August 12th 2020 : https://www.scottishpoetrylibrary.org.uk/poem/veesions-frae-a-heilan-burn-1986/ For more information on publications by Sheena Blackhall, visit http://sheenablackhall.blogspot.com or the on-line catalogue of the Nat. Library of Scotland www.nls.uk/catalogues/online/index/html. All of Blackhall’s poems in Scots and English, are now uploaded on www.poemhunter.com. Her website can be found on http://smiddleton4.wix.com/sheena-blackhall. An interview in podcast form with the poet appears on: http://www.scottishpoetrylibrary.org.uk/connect/podcast/sheena-blackhall. Thanks are due to Malfranteaux Concept for publishing this volume, and Frieda Morrison for her ongoing support. August 26th 2020: copyright Sheena Blackhall
Posted by Sheena Blackhall at 10:33 No comments:

The Poems: The Love Jam of Nostradamus

Acknowledgements:Pamphlet no. 156 Title: The Love Jam of Nostradamus, Published by Malfranteaux Concepts Aberdeen, Printed by: Repro Overflow 5 Novar Place Aberdeen.Cover: A black & white version of a woodcut by Johannes Zainer 1473. The Murderet Bairn is based on information from https://holeousia.com/about-me/deeside-tales-the-stories-of-a-small-glen/ I recorded The Auld Woman fa steeked the door on Daith, on the following website: Forest Heritage Scotland : Discover your roots in Scotland’s forests www.forestheritagescotland.com. The Auld Wumman fa steeked the yett on Daith, is a story told to me by Stanley Robertson. This is a version I wrote from the transcript of the audio file I recorded. The story Bojo was written in response to the Journalists’ Charity/Dickens Fellowship competition which aimed to find a new Dickens character for the 21st century. There were almost 300 entries in the competition to mark the 150th anniversary of the great writer’s death. The competition was used to raise awareness (and funds) for the Journalists’ Charity which, having begun his career as a freelance Parliamentary reporter, Dickens helped found over 155 years ago. ‘Bojo’ was one of the short listed entries. The Journalists’ Charity trustee, Charles Garside, recorded it on You Tube Volume 1 track 12. https://journalistscharity.org.uk/dickens/ The Ballads of Torry and Banchory were inspired by The Storytelling Centre Edinburgh’s project Scottish Story Ripple. Deeside poems were written on a day up GlenGairn filmed by Grace Banks for our THAIA initiative. The Lonely Monkey Puzzle Tree was published by Sally Evans on her poetry website, inspired by her comments on Facebook. This a Limited Edition of 50 books. For more information on publications by Sheena Blackhall, visit http://sheenablackhall.blogspot.com or the on-line catalogue of the Nat. Library of Scotland www.nls.uk/catalogues/online/index/html. All of Blackhall’s poems in Scots and English, are now uploaded on www.poemhunter.com. Her website can be found on http://smiddleton4.wix.com/sheena-blackhall. An interview in podcast form with the poet appears on: http://www.scottishpoetrylibrary.org.uk/connect/podcast/sheena-blackhall.This book is dedicated to Sally Evans, poet & friend 2020 © Copyright Sheena Blackhall August 2020
Posted by Sheena Blackhall at 19:31 No comments:

The Poems: The Plumber's Widow

Acknowledgements Title: The Plumber’s Widow: 2020 Pamphlet 155 Published by Malfranteaux Concepts Aberdeen Printed by: Repro Overflow 5 Novar Place AberdeenCover: Detail from a sketch by Henri Toulouse Lautrec Acknowledgements This a Limited Edition of 50 books. For more information on publications by Sheena Blackhall, visit http://sheenablackhall.blogspot.com or the on-line catalogue of the Nat. Library of Scotland www.nls.uk/catalogues/online/index/html. All of Blackhall’s poems in Scots and English, are now uploaded on www.poemhunter.com. Her website can be found on http://smiddleton4.wix.com/sheena-blackhall. An interview in podcast form with the poet appears on: http://www.scottishpoetrylibrary.org.uk/connect/podcast/sheena-blackhall I wrote Tales frae a Clachan to ingather in ballad form Ballater stories, inspired as a spin off from an upcoming performance of 'The Hills an in Atween' for SISF. See Grace’s description here:‘The Hills an in Atween – a tapestry o life wi Grace Banks and Sheena Blackhall Grace Banks has worked wi schools as a storyteller and outdoor practitioner for years. Increasingly the question has arisen: how can we support our next generations to care and love the land if they’ve no connection with nature? Grace devised a simple project where for 8 weeks a class would be fully immersed in their local river (not physically!) – looking at the life that’s dwelt on, in and around it from the distant past, to now and what of our future? In Autumn19 the Storytelling Centre provided a seeding grant from The Andy Hunter Bursary, which enabled Grace and Sheena to introduce the project to 4 classes in 4 schools through story and song. Each class was visited by a number of specialists and artists who supported them to discover and explore their local river. The teachers were given supplementary materials to compliment the youngsters’ experiences so the whole class deepened their understanding of the importance of waterways both generally and locally. Their discussions, artwork, creative and factual writing and music express much of what they have gained.The project also enabled the young people to be introduced to their local green or historical community groups, which was wonderful. The children’s creations weave into this audiovisual-scape, which portrays the significance of our waters and the life they support.’ G.B.’Thanks are due Malfranteaux Concepts for publishing for this pamphlet. Sheena Blackhall © July 2020
Posted by Sheena Blackhall at 10:52 No comments:

The Poems: The Rabbit Man

Title: The Rabbit Man: 2020 Pamphlet 154, Published by Malfranteaux Concepts Aberdeen, Printed by: Repro Overflow 5 Novar Place Aberdeen Cover: Poster by Anonymous, no Text, Magician on Moon,This a Limited Edition of 50 books.The poem Lockdown XX was inspired by the digital exhibition of the Aberdeen Artists’ Society, 2020. Thanks are due to Frieda Morrison for bringing The Narcissistic Fish by Scottish Opera to my attention. Thanks are also due Malfranteaux Concepts for publishing for this pamphlet.
Posted by Sheena Blackhall at 20:05 No comments:

The Poems: Into the Blue

Title: Into the Blue: 2020 Pamphlet 153. Published by Malfranteaux Concepts Aberdeen. Printed by: Repro Overflow 5 Novar Place Aberdeen. Cover: ‘Into the Blue’ by the artist Rosy Long. This a Limited Edition of 50 books. 2020 © Copyright Sheena Blackhall June 2020 Of the 10 children of George Philip & his wife Helen Craib of Coull, Tarland, (my great grandparents), half immigrated to the New World. Their first child George, homesteaded in Tilston Manitoba in Canada in 1898, and one of their grandsons later moved to Medicine Hat. Three of my great grandparent’s children immigrated to Illinois, two to Canada. Their 7th child, Patricia, married Arthur Simpson of New Deer, and they immigrated to America, passing through Ellis Island, as did their 8th child William, who married Arthur Simpson’s sister. Ellis Island is a historical site that opened in 1892 as an immigration station, a purpose it served for more than 60 years until it closed in 1954. Located at the mouth of Hudson River between New York and New Jersey, Ellis Island saw millions of newly arrived immigrants pass through its doors. The first nations in the area of Canada where the Philips’ children settled were the Blackfoot and the Cree. The first nations where the Philips’ children settled in Illinois were, amongst others the Dakota Sioux. One descendent of the Craibs is settled in Halifax, Nova Scotia. On my father’s side, my brother Ian Middleton settled in Rua Engenheiro Monlevade, São Paulo, swopping his mother tongue for Portuguese. The indigenous Guarani people live on the lands surrounding the Pico do Jaraguá Mountain in São Paulo. Three families have lived on this 72-hectare plot of land since July 2014 when FUNAI (Brazilian federal agency of Indian affairs) recognised it as traditional Guarani territory. My half-brother Charles Middleton Ritchie settled in Oshawa Ontario. Canada seems to have been a popular choice for Deeside men to emigrate to. Amongst the First Nation people there, are the Mohawk, the Cree, the Chippewa and the Delaware Indians. Most of the diaspora from both my parents’ families, (Craibs & Middletons) went not to emigrate, but to work in Ceylon and Kuala Lumpur, tending to retire, for the most part, back to Aberdeenshire. But that is another story
Posted by Sheena Blackhall at 17:56 No comments:

Title: The Arrival of Thoughts: May 2020 Pamphlet 152 Published by Malfranteaux Concepts Aberdeen Printed by: Repro Overflow 5 Novar Place Aberdeen Cover: Is ‘Time Transfixed’ by the Belgian Surrealist René Magritte, 1898–1967. Magritte was unhappy with the English translation of the original French, La durée poignardé, which literally means “ongoing time stabbed by a dagger.” The Art Institute of Chicago is pleased to offer free, unrestricted use of over 50,000 images of works in the collection believed to be in the public domain or to which the museum otherwise waives any copyright it might have. This a Limited Edition of 50 books. Some of the poems were inspired by two of Catherine Arnold’s books, Necropolis, London & its Dead, and Bedlam, London and its Mad. The Bird Man was written to celebrate the wide range of creative work undertaken down the years by Larry Butler. Craobh was inspired by a project led by Mandy Haggith. The Beauty of Painted Stairs was written on receiving an e mail from Don Robert House, with photographs of some amazing street art. This book is dedicated to Don Robert House Illinois, and his family, my kinsfolk 2020 © Copyright Sheena Blackhall May 2020
Posted by Sheena Blackhall at 19:18 No comments: